Blessed Anne Marie Javouhey (1779 – 1851) urged by the desire to seek, find and accomplish the will of God, founded the Congregation of the Sisters of St. Joseph of Cluny, in Cluny (France), under the patronage of St. Joseph. In fulfilling the will of God revealed to her by a special intervention of God, she went beyond the boundaries of France to Africa and Mana (South America). At Mana she was the pioneer for the liberation of African slaves (apartheid). The sisters of the Congregation are scattered over the five continents, imbued with the same zeal to carry on her mission in the Social, Medical and Educational fields. This congregation is geographically divided into provinces, of which the Province of South East India, having its headquarters in Pondicherry, India, is one of them. In 1827, the first three Cluny Sisters came to Pondicherry. They were followed three years later by Mother Rosalie Javouhey, Anne Marie’s youngest sister. In accordance with the spirit of the Foundress, they launched out into social, medical and educational fields. To impart sound moral, spiritual, human and social values to the students for life, and to prepare them for their respective roles in society, schools were established.

Saint Joseph is its patron. The sisters learn from him to live in intimacy with Jesus and Mary, and to appreciate the nobility and sanctifying value of work. All the letters in his name points to the saint’s outstanding virtues: J for justice, O for obedience, S for silence, E for experience,P for prudence and H for humility. Thus Joseph did indeed possess all the virtues indicative of being ‘just’.
Saint Joseph watches over children with loving care, just as he guarded and cared for the Infant Saviour. May the serenity of the modest workshop of Nazareth ever reign in our workplaces the serenity that makes human labour a factor for growth and giving it the dimension of a fruitful vocation.

Prayer to the Heart of Blessed Anne Marie Javouhey

O Blessed Anne Marie Javouhey,
whose heart beat only for God and souls,
teach us to love as you loved,
to pray as you prayed,
to suffer and to pardon,
to give ourselves as you did.
Obtain for us a heart like yours,
loving intensely God’s Holy will,
believing in His love in everything,
a heart strong and kind, ardent and pure,
loyal and faithful, humble and confiding,
a heart ready for every sacrifice,
a heart like the Hearts of
Jesus, Mary and Joseph. Amen.

Message from the Correspondent 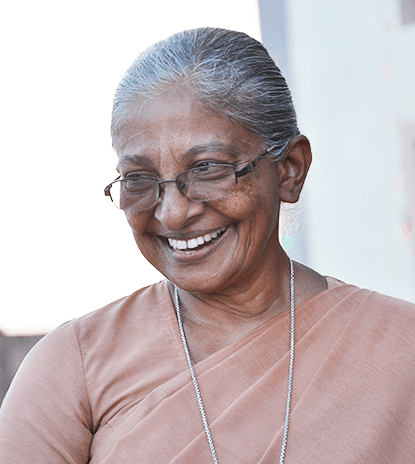 Website is a means of giving right input to young minds. The vision and mission of this institution will enlighten many who browse through.

The task of bringing up and training children is one of the most important concerns of humankind. The numerous books by psychologists and counsellors which deal with this matter is proof enough. The survival of our race depends on the way we bring up and train our children. The exercising of parental responsibility and discipline should go hand in hand.

True to the vision of blessed Anne Marie Javouhey and the will of God, we aim at inculcating a sound Christian and human formation, for the total development of the whole person, making the student a well integrated person, spiritually, socially, intellectually, morally and culturally, well equipped and ready to collaborate with others in the building up of a just world social order.

The education imparted in Cluny School wakes up the students.  A girl wakes up to the call of God, rises above all barriers.  Her presence is a “Wake Up” call to the family, the country and to the people.  She is confident and clear about her responsibility.  In all her endeavours she believes in the motivating dictum, “The task ahead of you is never as great as the power within you”.

Her trust in God, trust in herself, hard work and sincerity make her shine before people, that those who see her good work may, praise the “Father in Heaven”. “When sleeping women wake up mountains will move.”

True to the vision of Blessed Anne Marie Javouhey and the will of God, we aim at inculcating a sound Christian and human formation, for the total development of the whole person, making the student a well integrated person, spiritually inspired, socially committed, intellectually enlightened, morally upright, culturallywell equipped and ready to collaborate with others to be agents of social transformation and leaders of integrity.

Passion is the overwhelming feeling, the burning desire, the drive that ultimately creates change.

It is the total belief in yourselves and your abilities that nothing can stop you.

As you explore this website, may you experience this passion of learning … creativity, passion with its depth and length.